With so many rapids and misconceptions about the Zambezi River and their size, we hope this run down may allay some of your fears and give you the encouragement required to run the worlds greatest river. When the pioneering run was done in 1980 by Sobek, what a sense of adventure dawned on these amazing explorers. They even lined the rafts through Rapid 5 during the first descent as they felt it was too large to run. Now it gets run on a daily basis.They numbered all the rapids as they felt there were just too many to name. Nowadays they are numbered and named.

When is the optimum time to raft the Zambezi and why?

The prime rafting season on the Zambezi is an fact in low water from approximately August until December. Each year this changes, depending on the rains on the Upper Zambezi in Angola and Northern Zambia. The Zambezi river is better when it is low water, due to the water being constricted or ‘squeezed’ between rocks and over very deep rocks in the river. Bigger features and hydraulics form making for great rafting. The only downside is Victoria Falls are not quite as impressive at this time of the year.

Zambezi Multi-day Rafting Rapids (A written sample of some of them!)

Rapid 1, The Wall: A series of large waves coming from the falls and the “Boiling Pot” and going directly into a large wall, immediately above Victoria Falls bungy bridge.

Rapid 4: Morning Glory: A wonderful rapid with a series of potential routes through the rapid. Hard right, hard left of running the Dragons Back.
Rapid 5: Stairway to Heaven: One of the most fun rapids on the Zambezi. A large pour over on the right side of the river shows you where to go and not go! A safe run is shown by marker waves to the left of the pour over and down through a series of big waves and into the Catchers Mitt. Pure fun!

A big hit in Stairway to Heaven

Rapid 7: Gullivers Travels: A technical and long rapid to challenge.The rafting guides line up at indicator rock, running right of this. After paddling onto the green highway, you will paddle to the right of the river through directors wave and past the crease and into Land of the Giants. The rapid can be more challenging at higher flows in early August with the Crease being a big wave.
Rapid 8: The Midnight Diner: 3 choices in this rapid. The hard right is a fairly easy run over shallow rocks. The centre offers more thrills and a large wave and left of center is a huge hit.
Rapid 9: Commercial Suicide- PORTAGE. A large ledge drop at the top plus an enormous hydraulic at the bottom feeding into a shallow rock, time to walk this one!

Rapid 11: Creamy White Buttocks: A stunning rapid. At high flows Creamy White Buttocks or The Overland Truck Eater is a tubing wave where kayakers and surfers can surf it’s green face. At lower flows two large waves will crash over your raft from the right side.
Rapid 13: The Mother: This rapid is classic big water Zambezi. Caused by a constriction in water flow, the first and 4th waves in The Mother are massive. The first wave is a peaking crest of 2 converging waves. A clean wash out into a large flat pool.

Rapid 18: Oblivion: The world famous rapid. This tends to be at its best in low flows September – November. It consists of three large waves, of which the third is the biggest (and best!) Many rafts flip here although it is VERY easy not to.
Rapid 23: Morning Shower: This rapid takes in a right hand bend in the river with the waves and river pushing hard to the left. Keep right for an awesome ride through the tail waves.
Open Season: One of the biggest rapids on the Zambezi. Grade 5 fun. There is a large hole on the river left and some rocks towards the middle of the river. At higher flows the hole is not as much of an issue, so you can run the centre line, but when the river drops the raft line is hard left to centre dissecting the two pinnacle rocks mid stream.
Narrows 1-4: A series of rapids where the water is constricted by the width of the river. This may result in ‘boils’ or waves formed by the features. A gorgeous and scenic section on day 3 of your multi-day rafting trip on the Zambezi.
Chamamba: The river goes through a narrow entrance. This feeds into two large waves on river left and into a flat pool before the main horseshow drop. This should be fun left and care should be taken to paddle away from the wall.
Upper Moemba: A large Grade 5 “sneak run” The largest rapid so far on the river. It occurs on a left bend but you run the hard right channel. Worth getting out to “scout and inspect” this rapid. The run is to paddle hard towards the left side of the channel and for your guide to run each of the 4 massive waves with alternate from left and right, very straight.

Ghostrider: The biggest and best rapid on the Zambezi River. Class 5 big water at its best. Three enormous waves where rafts disappear behind only to re-appear on top of the wave. The move is to run from centre to the right running all the waves square! This rapid is worth the journey!

Lower down on the Zambezi there are still more rapids, but if you are embarking on a 7 day rafting vacation further down the Zambezi to Matetsi River Mouth, you’ll get to see Deep Throat and a few other rapids before your helicopter flight back to town. You’ll also be treated to some fantastic wildlife including hippos, crocodiles and bird life. 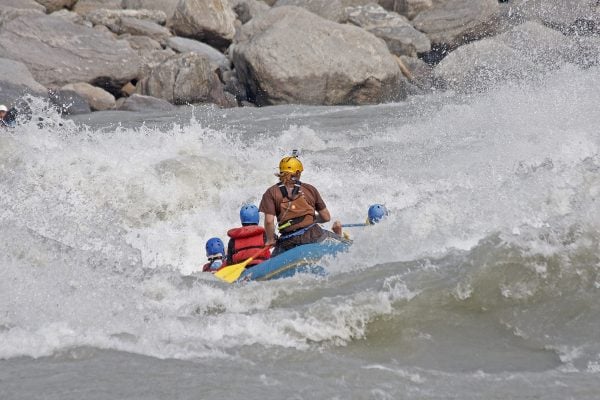