We arrive into Lae’s Nadzab Airport, with it’s basic baggage collection hall ready to collect our 300kg of baggage, bought in with a variety of means from USA, Australia and the UK to get this trip running on the Watut River. Outside, our waiting vehicle is parked beside a number of other buses and pick ups all with metal sheeting over the windows. As we pass all the friendly locals offering help with their wide grins and betelnut stained teeth, we climb aboard our bus into Lae itself. We pass the old Lae Airport where Amelia Earhart’s plane took off on her fateful journey and onto our hotel. Surrounded by high fences but backing on to the War Memorial, we meet the rest of the guiding team. Darryn has been here for 4 days shopping (a challenge for some items resulting in a menu change), clearing boats from customs and getting the lay of the land. We had received so many negative comments about Papua New Guinea in the build up to this trip, about how hardcore the locals were, how you can’t make anything happen, but this could not have been further from the truth. The place has a real ‘Africa’ feel to it and similar to our expeditions to the Omo in Ethiopia, back before the dam was built.

With over 150 rapids you are in for some serious fun. (Image: Lincoln Taylor)

The next day, we sent our gear truck into the hills to set up the gear at the put in point, whilst the guests who had joined us from Canada, USA, UK and Australia, jumped on the bus only to be given a quick prayer from the driver for our safe return. Hmmm, did he know something we didn’t? The drive was gorgeous, although, the road a little pot holed at times, through stunning jungle winding up and over the mountains to the put in point. The rafts being pumped up and loaded had drawn quite the crowd. Ryan our safety kayaker was playing a great game with the kids where he would flip the raft and they would try and stay dry, much to the amusement of the locals.

Raft flipping practice with the kids turned into a great game.

As we departed, we were all pretty excited at what we were about to embark on. This was the first commercial rafting trip for more than 12 years and this could quickly be seen from the many locals running out to wave to us and some of the young children jumping on their inner tubes to float down with us. Night one, we find a campsite and negotiate a price for staying and security. We are really grateful to have Bob, Ryans Dad, who speaks fluent Pigin, the local language. Security was tight, or so we thought, as we were watched while we slept. A few cups and wine glasses ‘walked’ on night one, until we worked out how it all worked. Each evening, de-pack camp, put all your personal gear inside your tent and the guides sleep on the rafts with gear under them. Subsequent nights, no gear went missing!

After breakfast we departed into a more remote part of the Watut River ready to be challenged by some of her legendary rapids. Only one of our team, Ryan ‘One Hour’ Butler had done the river before. Every time we asked him something, it was around one hour, hence the nickname. We passed through a couple of villages with very excited locals and the next thing I see is Darryn very focussed and paddling into a large Grade IV+ rapid, followed closely by Brad and myself in the gear raft. We had just run the first part of ‘Four Part Harmony’ which had immediately sharpened the senses! We went down to inspect the next rapid and decided running the gear raft through first was possibly the answer, so with me at the oars and Darryn and Ryan ably assisting to make the tight moves with paddles, we set off making it with relative ease. It was decided to take the slightly easier route on the left side which looked to have less consequence. Boat one with Brad and his team, through. Darryn and his crew started to run and at the key moment, THE AUSTRALIAN fell out (not that the kiwis want to blame you Tom!) and whilst trying to rescue him during the crux move the raft capsized. With lightening reflexes, Ryan who was running safety on the bank rescued 2 guests from the water, Darryn ‘bagged’ two on his throwbag and the other two stayed with the boat being pulled to safety. We stopped shortly afterwards to camp and it was all agreed, it had been an eventful day. To add to the fun, that night, the gear raft ended up with a hole, so we repaired this in the rain and humidity (never ideal for glue to set) helped by Darryn’s skill and 20 locals holding patches in places and tarps over us. A real team effort. Meanwhile the rest of the group had gone up to the village for a visit and came back with armfuls of fresh coconuts which we found to be great for quenching thirst.

A great shot showing the continuous nature of the Watut. (Image Lincoln Taylor)

The next day, we were aware that Ryan ‘One Hour’ had mentioned there was another big rapid called Between A Rock And A Hard Place (BARAAHP) only to find a large log facing downstream to prevent the ‘crux’ move. We stopped the rafts high above the rapid and ran the gear raft down to the last eddy along with the 2 paddle rafts and lined the boats through with nobody on board to a point where we could safely run the rapid. After this, we were treated to  fun Grade III and IV rapids until we reached a suitable campsite on the left side of the river. The guests perched tents in a bamboo grove and we set up the kitchen and tarp down the near the river. We loved this camp and the villagers were really friendly. We did our daily ritual of packing up camp and sleeping on the rafts. Shortly after Darryn made fresh donuts, we experienced some of the notorious rain famous in the area, We chose this time as it was at the tail end of the rainy season, but tonight it rained and rained. The locals found much amusement that we slept in the rain on our rafts and left a perfectly good tarp up for them to sleep under. We awoke in the morning to sunny skies and plenty of villagers sleeping on a banana leaf bed under the tarp. As always, we had put in a marker to keep an eye on the water levels and it had not come up much despite the rain. We packed up, sent our kayaker down river to check for trees in a gorge we knew was coming up and within 1 hour, the river had come up to nearly a meter. Sheri emerged from the toilet with her helmet on, stating ‘that was Grade V’. 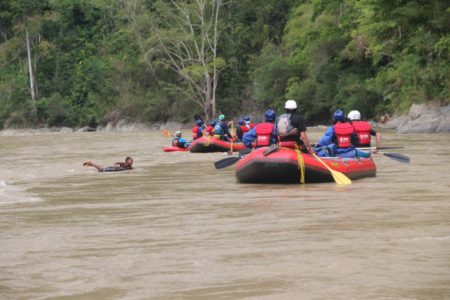 We were in for a massive treat today with a stunning 2 km gorge with few rapids, but no eddies and then into a very continuous 10km section of amazing rapids. Around 30 minutes after we left camp we see Darryn as the lead boat running some pretty large waves and holes in a long section of whitewater. Brad follows with his raft and as I follow the raft takes on a massive wave and loses 2 people, one of whom was British Gary. We decided this rapid needed to be called Brexit. As we chased the swimmers and Darryn pulled in Gary and Candi after their swim, we are still running big Class IV rapids one after the other trying to get to the riverbank. As we do, 83 year old Jaro has the biggest grin on his face, loving the excitement of it all. We floated down to our gorgeous last time camp, this time a secluded sandy beach once we pass out of the gorge.

Get ready for some amazing scenery on your adventure. (Image: Lincoln Taylor)

The last day sees a short ‘one hour’ paddle down that turned into 3 hours before the long boats showed up to motor us at speed down the last part of the river before embarking on our sea kayaking journey (but thats another story). We realise we have all had an epic adventure and enjoyed one of the world’s best rivers. For me, who rafts all the time, found a trip that truly sparked my love of rivers again and that feeling of running a new river. I truly can’t wait to go back next year. We hope that if you are an adventurous soul, you’ll come and join us on this amazing adventure.

The fast way out. Long boats saved the long paddle out on the Watut and Markham Rivers.