A Guide To The Rapids On The Karnali In Nepal

Hamish McMaster, Owner & Founder of Water By Nature explains some of the rapids you’ll find when you paddle down the Karnali River in Western Nepal.

The Karnali has a very deep place in my heart. It was my first river trip in Nepal when I used to work for David Allardice, renowned kiwi river runner and explorer. Dave was well known for placing a great deal of trust in his crews and sending you out with a world class team of rafting professionals. Having just returned from the Zambezi and a few multidays out there, I was raring to go. Back then, we used to hike into the Karnali, but nowadays, we fly our guests from Kathmandu to Surkhet and then take a short but gorgeous drive to the put in point at Dungeswar (altitude 560 m – 1850 feet) where we begin our journey through this spectacular jungle clad valley. 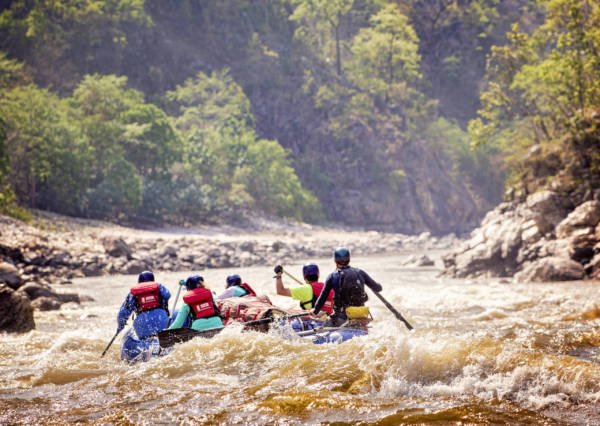 Josh & his crew rafting through Inversion Rapid in Spring

Here are a few of the amazing rapids on the Karnali: 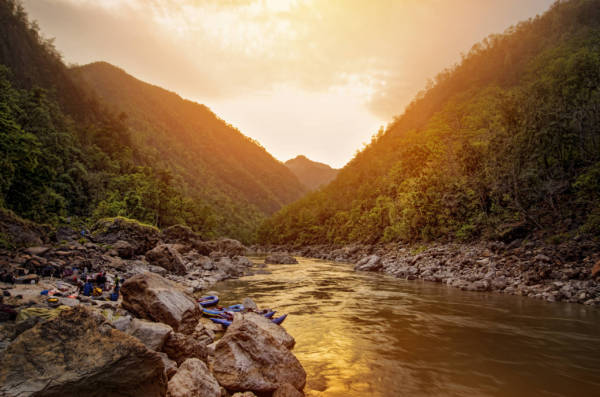 Stunning vistas on this wonderful river

Sweetness & Light: We normally get to this fun rapid in day two. We scout (inspect) the rapid from river right side. In high flows, we commit to running down the middle of the rapid where we ride two very large waves. In low flows, you get to run the right side of the rapid down some steep drops. (Grade IV)

The gear raft has plenty to do on the Karnali

Humans For Lunch: A fabulous rapid where we run down through the continuous wave trains. This is fun-filled rafting at its best. (Grade III) 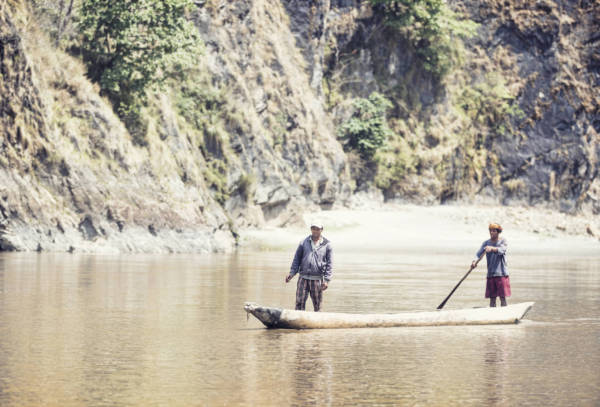 A traditional ‘dunga’ running the lower reaches of the river

Jungleghat: A small wave train with a large swing bridge where we normally pull over for some Nepali hospitality and a cup of masala chai (milky spiced tea) Yum! (Grade III)

Josh and Chrish crossing the bridge at Jungleghat

Jailhouse Rock: The start of the gorge section of rapids. Jailhouse is a spectacular rapid with a large hole on the river right side. The line is generally to start centre and get your crew paddling hard left where you manage to get a good view, but miss the hole. (Grade IV) 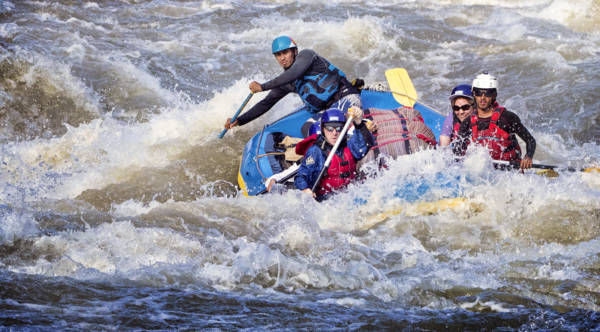 Inversion: Immediately after Jailhouse, so it helps you focus! A long rapid with a series of very large waves coming from the right side, so you want to be running them straight! The reward afterward is a beautiful waterfall to hike and one of the most beautiful beaches on the river: Scorpion Beach, where we spend 2 nights normally, enjoying a layover day. (Grade IV)

God’s House: Around 20 minutes downstream from Scorpion Beach is one of the most fun rapids in the world. We scout the rapid from the river left where the river at high flows is feeding into a very big hydraulic on the center-left of the river. It’s a hard centre to right move to miss the hole — at extremely high flows, the hole becomes a wave! (Grade V)

One of the world’s best rapids, God’s House

Juicer: As soon as you enter into the gorge at God’s House, you realise you are in for some special white water. Juicer has a large pour-over hole on centre left at the top and another on the centre right. You can paddle from the left to the river right through a large wave in the center (pointing the raft to the right) to miss the second large hole behind it. An awesome piece of white water. (Grade IV) 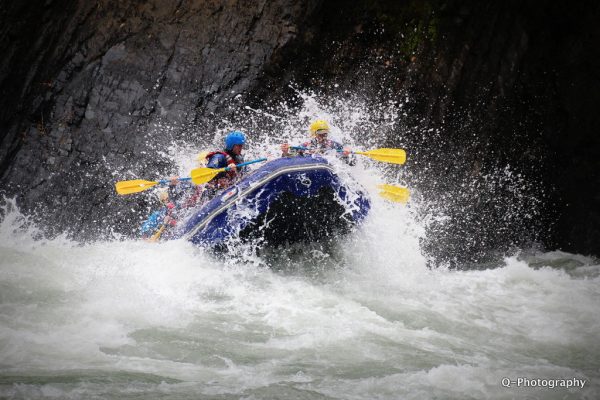 Flip N Strip: A scary name, but a very fun rapid. Some very large holes on the river left side, so we run from the centre to the right of the river to avoid the large hydraulics. This is one of the reasons we use stern frames on our rafts to add extra power to the crew to make these crux moves. (Grade IV)

Totali Ghat: Look out for the bridge below Flip N Strip! Here, we find this awesome Class IV rapid on a left hand bend. There are some really large hydraulics on the left side of the rapid next to the canyon wall so we run the rapid hard right. (Grade IV)

Snapshot: A wonderful punch through a large wave which is bound to get the entire raft wet! You’ll be paddling all the way through this entire rapid section. (Grade III)

Freight Train: As we emerge from the gorge and approach a right corner, we are treated to a very long rapid carrying us out of the gorge. (Grade IV)

Red Rock Canyon: A great section with various small but fun rapids down to the Seti Confluence. Enjoy this wonderful section of white water. (Grade III)

Wizard’s Sleeve: A relatively new rapid which was formed with a large landslide in 2009 has left a challenge for river runners on the normal relaxed section below the Seti Confluence. A series of holes and waves, this rapid will ensure you are not too relaxed on the last few days! (Grade IV)

The Karnali has two distinct seasons. The classic Fall season runs in early October and has volumes in the vicinity of 12000-15000 CFS (cubic feet per second). In the Spring around April – May the river is lower volume but coming up with the onset of monsoon. Expect volume of around 8000 – 9000 CFS.

This 180 kilometre journey (110 miles) to Chisopani where the river emerges onto the plains is a real classic. Regrettably given its volume, this river is under threat from a dam project.

The river trip has a wonderful post script option as well to the gorgeous Bardia National Park, one of the most spectacular in all of Nepal. See Asian rhino, Asian elephants, mugger crocodiles and the elusive Bengal tiger.

Your awesome Karnali journey concludes with a flight back to Kathmandu from Nepalganj.